Happy Bornday Master Wilson,
You remain America’s greatest playwright living or dead. We remember to remember. This year we will complete the production of the entire Century Cycle in chronological order, it has been a scared journey that has taken us to places we could not have imagined before our sojourn with you begun. We have been changed, made better, more whole, embracing our duty to life and for that we are eternally grateful. We hope that in some way our dedication to you and the Cycle pleases you and that we have helped to insure that your work will be enjoyed for decades to come.
Again Happy Born Day, you live on. 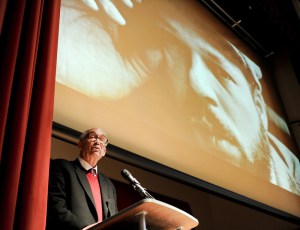 Larry Glasco from the University of Pittsburgh talks about August Wilson at the Hill House Association’s Kaufmann Center in the Hill District on Saturday, April 25, 2015. To connect to the entire article by Christopher Rawson of the Pittsburgh Post-Gazette, click on the image.

August Wilson would have been 70 years old today, and despite the fact that we miss him terribly and wonder what he might have produced if he would have lived these past ten years (there was talk of turning toward comedy, of which Mr. Wilson had a wicked sense of humor that comes through, from time to time, in his various plays).

To celebrate his 70th birthday, I’ve decided to review a number of recent developments that have commemorated the life and work of Mr. Wilson.

First, there is the PBS American Masters documentary The Ground on Which I Stand, directed by Sam Pollard.

Then there is the…

I create; therefore I am.
View all posts by Ayodele Nzinga, MFA, PhD →
This entry was posted in Uncategorized. Bookmark the permalink.